Green ammonia: enabling production through hydrogen and nitrogen storage.
Fuel for the future

What is Green Ammonia? We all want to move as quickly as possible to a world free of carbon emissions, let us explain how we want to participate in this transformation, through our DCPV.

What is the potential of Green Ammonia? To think about the future, it is important to understand today’s energy mix. Energy is more than just electricity, it includes energy needed for heating, cooling and transport (ocean, road, air).

The massive expansion of renewable energy production needed cannot (fully) take place in the industrialized world. Wind and solar energy should be harvested on those locations (Australia, Namibia, Patagonia, ...) where it is most efficient.
" Simply calculated, we have to expand our green energy production with at least factor 20 to become carbon neutral! "

Hydrogen to green ammonia, why?


1Transporting the energy to our industrial areas

It has become clear during the last few years that converting energy into hydrogen (H2) is the best way to buffer this energy, but it causes many headaches in storage and transportation. Industrial consensus is that Ammonia (NH3), known and proven technology, is the best hydrogen carrier molecule. If made with green hydrogen, it will become so called green ammonia.

2The influence of day/night (solar) and/or seasonal (wind) cycles

Due to the nature of renewable energy sources like solar and wind, energy supply is never constant. This, in turn, creates a variable hydrogen supply to the ammonia synthesis. While ammonia synthesis plants can deal with some flexibility, they are not designed to vary production to the extent shown in table 1. Even if they were; the reactor’s average utilization would be as low as 35%, and would not be cost-effective. Thus, a buffer is needed to flatten the peaks and valleys in hydrogen production. 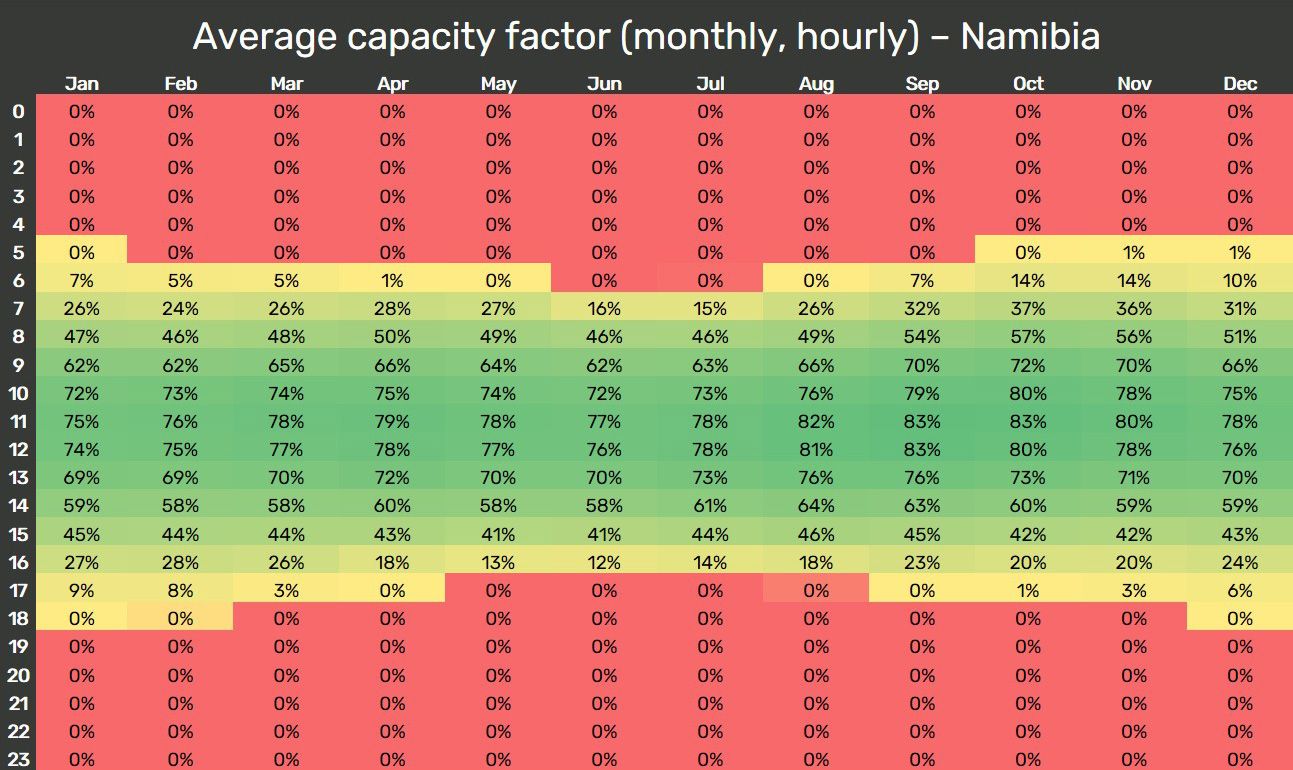 DCPV’s are the most efficient solution to compensate for day-night and/or seasonal cycles in renewable hydrogen production. By simultaneously buffering the 2 gases needed for ammonia synthesis (hydrogen and nitrogen), reactor utilization can be kept at an efficient 90-100%, allowing a much smaller reactor to produce the same output.

We have modeled the impact of using our DCPV storage on a green ammonia plant for both wind and solar, on different locations on the globe. These systems have a 200 MW PEM electrolyser; energy generation and reactor sizes are optimized for cost-efficiency.

Due to the daily pattern described in table 1, a reactor using solar power is only utilized 35% (on average). For all simulated locations (Australia, Oman, Namibia, Chile), this implies that a reactor capable of 150.000 tons per year only produces ±55.000 tons per year.
" Introducing DCPV storage (±20 tons H2) reduces the reactor size required by over 60%, while maintaining the same output of ±55.000 tons NH3 per year. "
A simulation in central Spain allows us to analyse the effect of harvesting on (sub)optimal locations. The lower average capacity factor means significantly more solar power is needed to produce the same output, and the seasonal variations mean a lower utilisation is realistically feasible.

Wind generation is characterized by low daily variability, but suffers from larger seasonal variations than solar generation (typically higher winds in winter). Systems without storage can reach 70% utilization. A reactor size capable of 150.000 tons per year thus produces a maximum of 105.000 tons of ammonia.

Compared to solar power, more storage (75 tons H2) is needed to reduce reactor size, increasing its utilization.
" Not using any storage, however, will never be the most efficient option. "
In general systems using wind energy are more efficient. Since the impact of using storage is one of diminishing marginal returns, significantly more storage is needed to increase utilisation from 90 to 100% than from 60 to 70%. A balance will always need to be struck between costs and cost savings of using DCPV storage.

Below is an example of the impact of DCPV storage on a simulated wind farm in the North sea, using weather data going back 10 years. At locations with higher efficiencies, higher production rates are possible. 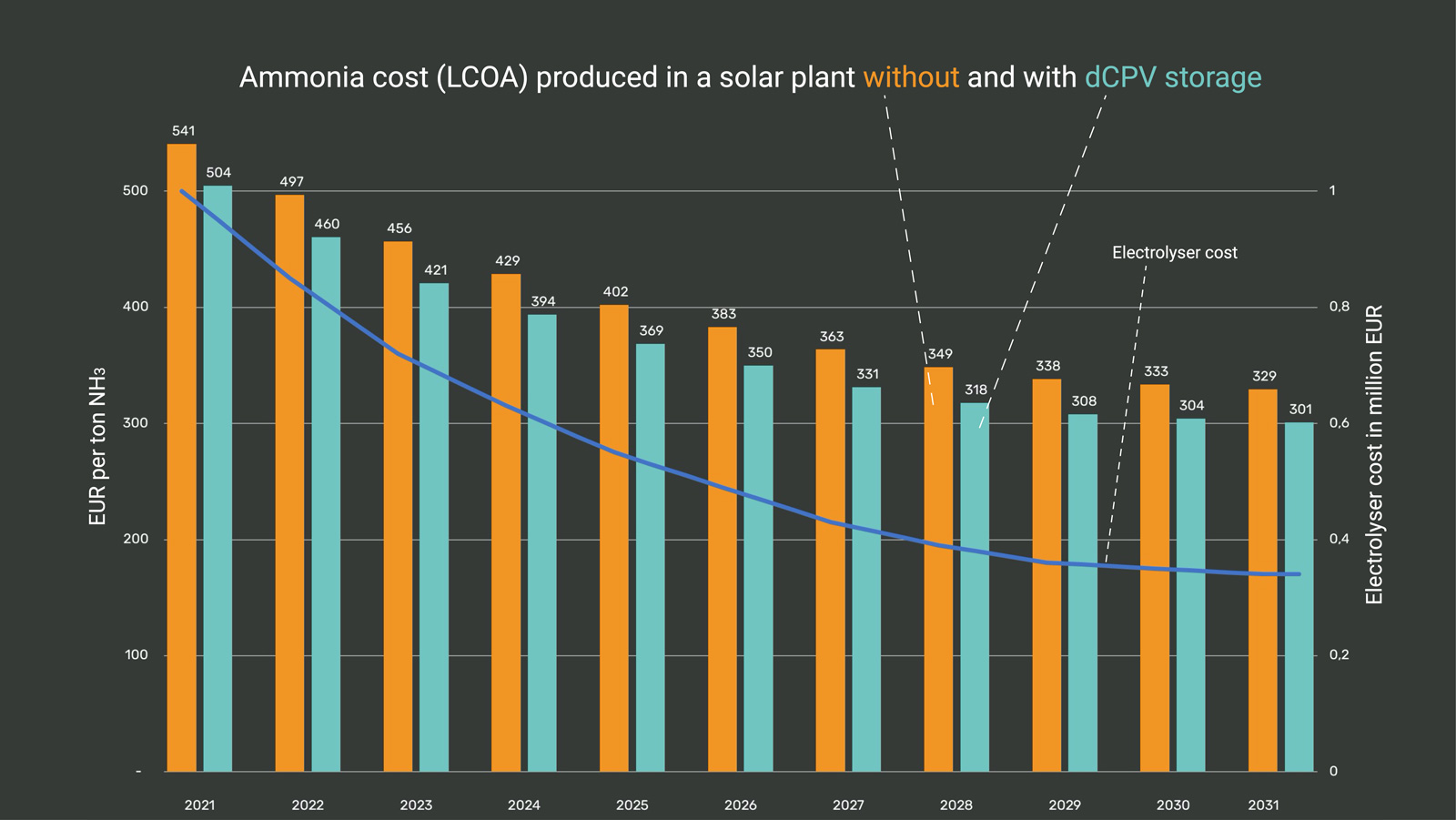 When electrolyser costs drop, which is expected during the coming decade, our solution gains efficiency. By 2030, we expect to provide a relatively larger impact on the levelized cost of ammonia (LCOA) than today.

The graph below shows the LCOA with and without using DCPV until 2031, assuming electrolysers costs drop 10% per year* on average. Additionally, we expect costs for modular ammonia plant to fall 3% yearly. As costs evolve, both the energy generation and ammonia synthesis have more weight in the LCOA. Since DCPV makes savings on both, relative costs savings are higher.

1. What are the concrete (in)direct uses of green ammonia?
Direct: Ammonia is currently used on a large scale in fertilizer, as a precursor for nitrogenous compounds and as a cleaning agent. Although the energy content is lower than that of fossil fuels, ammonia can be used as a fuel in converted diesel generators, or even in large solid oxide fuel cells (SOFC). Furthermore, gaseous ammonia can be burnt in gas turbines, similar to natural gas.

Indirect: Ammonia, a hydrogen carrier, can be cracked to release the hydrogen kept within. This allows the use of hydrogen in all its applications.
2. How will ammonia be transported back to the industrialized world efficiently? Why not ship hydrogen as liquid (cryogenic) hydrogen?
It would take 10 times the amount of energy to liquify hydrogen as opposed to converting it to ammonia. The temperature needed to keep hydrogen liquid is far lower (-252°C) than it is to keep ammonia liquid (-33°C), thus increasing storage costs. Because of the density difference, there is more hydrogen present in 1 litre of liquid ammonia (in terms of weight), than in 1 litre of liquid hydrogen. Additionally, as one of the oldest chemicals to be produced on a commercial scale, ammonia Infrastructure (physical and regulatory) for transport, handling and storage on a large scale has already been developed.

For long distances, large ships/tankers carrying ammonia are most efficient. Ships using ammonia as a fuel (which are already being built) while transporting it will not impact the carbon footprint of the ammonia production.
3. What are the costs for this storage solution?
We do not yet have exact figures, but since the cost improvements are so large, they will be without a doubt cost efficient. In our example systems, the cost reductions range between 10-25% of the original CAPEX, which is significantly more than our price estimates for DCPV storage. Further cost reductions can be achieved by structurally integrating DCPV storage, saving material use and CAPEX. For each project there is a specific amount of DCPV storage that maximizes efficiency and minimizes costs per ton ammonia.
4. Where are locations with optimal energy sources?
Wind power: Chili, Argentina, West-coast Australia, New Zealand, Morocco, Somalia, Namibia, South-Africa, Norway, Ireland, Greenland, Iceland, Japan, Taiwan
Solar power: Chili, Argentina, Peru, Namibia, South Africa, Australia, Oman, Saudi-Arabia
5. Where will you get fresh water for electrolysis?
Some of the countries we have listed have sufficient water resources. In countries poor of (fresh) water, desalinated sea water can be used; the energy consumption for this process is only 5-6 kWh/m³.
6. Are there any existing projects that are using this strategy?
There are many green ammonia projects being put into place. Most of these, however, are additions to existing grid-connected plants; since the grid is balanced (with grey energy sources), they do not encounter variable electricity supply. Additionally, most projects to date only partly decarbonize their hydrogen supply (+10%). These projects are good for advancing electrolyser development and solving implementation challenges, but they are only possible in industrialized locations and do not solve the main issue at hand.
7. What about batteries?
Energy needs to be stored somewhere in the supply chain. Storing electricity in batteries before using it to create hydrogen is therefore logical to consider. While batteries have the advantage of being placed earlier in the supply chain, the issues with their use are simple: size, cost and materials. To buffer the electricity needed to produce 150 tons of hydrogen on-demand, a capacity of +-10GWh would be needed. The world’s largest batteries being constructed today are only 2.5 GWh, and are significantly more expensive than our DCPV’s. Additionally, the environmental impact of the raw materials needed for these batteries must not be underestimated.
8. What about other hydrogen storage options?
There are many ways in which hydrogen can be stored. Compressed hydrogen storage tanks are the only option suitable for flexible day-to-day operation; others are too slow or costly.

Storage of gaseous hydrogen is well-documented, but generally contains several major flaws; storage density (space) and steel embrittlement and permeation. When delivering hydrogen via tube trailer for example, only 500kg of H2 can be carried in a 13m trailer. A single truckload would only last 15-30 minutes of production! If this same steel trailer would sit for a week, almost all of the hydrogen would have permeated through the steel. These issues are solved through DCPV’s; storage is structural for optimal use of space, and the two-layered design minimizes embrittlement and permeation. DCPV’s keep the advantages of compressed gas storage; low energy loss, cheaper materials and fast loading/unloading.

Want to hear more of our insights?
Follow us on Twitter, or get in touch below for more info on DCPV and our consultancy services.